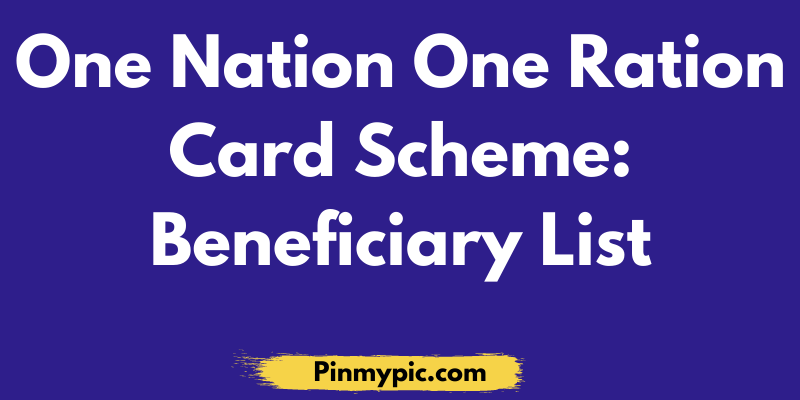 Under the One Nation One Ration Card Scheme, poor people of any region will be able to get ration from the PDS ration shop from any state of the country through their existing ration card. Minister of Consumer Affairs, Food, and Public Distribution announced the new scheme for people of India.

One Nation One Ration Card 2021 will provide relief to every poor or migrant citizen of the country. All the BPL families will benefit significantly from the introduction of this scheme.

One Nation One Ration Card Scheme 2021

People of Andhra Pradesh can now get the ration in Telangana and poor people of Telangana can get food essentials from any PDS ration shop in AP state.

Similarly, the migrant workers of Maharashtra who work in Gujarat can take ration from their existing ration card.

In this article, we will share all the information about the One Nation One Ration Card Scheme 2021. Read the complete article to know more about this scheme.

Implementation of One Nation One Ration Card Scheme

The Ministry of Consumer Affairs has said that there will be a national wide implementation of this scheme on June 1, 2020.

He mentioned that the facility of POS machines for ration cards launched in 14 states. If a person migrates from one state to another, they can avail their share of ration from any PDS ration shop in the new state.
To implement this scheme, all PDS shops need to install POS machines. In June 2019, the central government asking all the states and union territories to start this One Nation One Ration Card Scheme within one year.

Supreme Court Intervention On Implementation Of The Scheme

The Supreme Court asks the union government to consider implementing the scheme of ‘one nation one ration card scheme’ at the earliest. The migrant workers could get food grains at a discounted price during Coronavisrus lockdown in the country.

Rumors On The Scheme

There were rumors that issuance of a new ration card in the new scheme, but the Food Minister categorically rejected the claim and said that some people are spreading confusion.

After the implementation of the One Nation One Card Scheme, beneficiaries have to apply for the new ration card.

Why This Scheme Is Most Important

National govt is creating a central data repository to get all the details of ration cards, which are currently maintained by the states so that the repository acts as a clearinghouse to do the cross-checking based on authentication.

This scheme ensures that there is no corruption or duplication of benefits that are will be passing on to the beneficiaries.

The national food security act costs more than 1 lakh crore per year. Yes, it is costly, but it is highly needed. 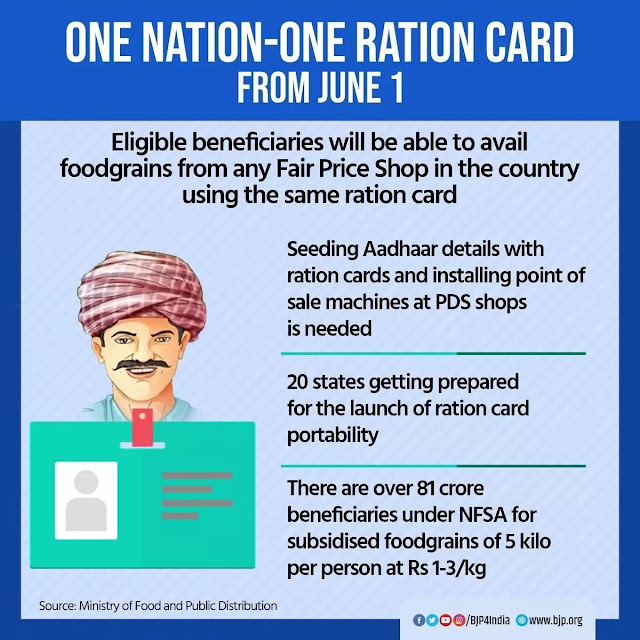 Key facts of One Nation One Ration Card Scheme

The Scheme Implementation In States

Eleven states in the country are linking the ration cards with Aadhaar numbers. The ration allocation in these states is through the point of sale. The Department of Food and Public Distribution is working to promote this scheme across the country.
This scheme implemented in some southern states like Andhra Pradesh, Telangana, Karnataka, and Kerala. The western Indian states, like Gujarat, Maharashtra, and Rajasthan also implemented this scheme. Northern states like Haryana, Jharkhand, Punjab, and Tripura started this scheme on January 1, 2020.

Benefits of One Nation One Ration Card Scheme

Apply For One Nation One Ration Card Scheme

Prime Minister’s address to the nation about technology-driven public distribution systems transparently to help citizens of this country. To benefit migrant workers, the government is coming up with national portability of the Ration cards. From now on, ration cards are portable in any ration shops in any part of the country. If there is a ration card holder today in Bihar or Karnataka tomorrow, a person moves to Rajasthan and can take his food ration from any public distribution shop in that state.

The Scheme Coverage In The Country

So national portability, which is now called one nation one ration card, will be implemented. By August 2020, 67 crore beneficiaries in 23 states are covered, which is 83% of all the PDS population. By automation of FPS, we assured a 100% coverage of the national portability of these cards by March 2021 in all the states and union territories.

No Revision Of Food Grain Rates After The Scheme Implementation

The beneficiaries who have to lift their food grains will continue to pay the same issue prices that are mandated and fixed under the national food security act, so there are no issues regarding rates under the portability scheme

Usage Of The Scheme In States

An average of 8 to 10 percent of all the transactions within these intrastate portability states is happening on an interchangeable basis between Fair price shops. The numbers will go up as a when migrants pick up within the country.

If you buy food grains this day in the Fair Price Shops, if I have to pay less, so therefore if my income outgo is less on the food grains because of this scheme, I eat better, I eat more, and my family will eat more. Therefore, the malnutrition levels will go down it is good for the nourishment of children and the whole family, so you take on the elimination of hunger

We need to keep track of the inventory that is being received and distributed from the depots so that it would help us to integrate the entire supply chain of the PDS beginning from the delivery of food grains to the state agencies. But the delivery to the beneficiary finally is the main objective of the government.

Suggestions On The Scheme

This one nation one card this card should also include access to health access, which will be a perfect thing

The extent of coverage of the population or the quantum of food grain supplied to these target groups is concerned there is no shortfall or deficiency of it.

The government said that it has enough food stocks in the country, so from the supply side as well as the targeting side they have not left any stone unturned and fully geared to meet future challenges

How to apply for one nation one ration card?

Why is one nation one ration card required?

With one nation one ration card, migrant workers can get subsidized ration in any corner of the country with their existing ration card

Which states have launched One nation one ration card?

What is one nation one ration card in UPSC exam?

UPSC may ask questions on one nation one ration card, so read the complete article to know more about it